Home " News " Ultrasonic battle against algae and micro-organisms into focus

Ultrasonic battle against algae and micro-organisms into focus

On the adventure with tomato grower Frank Dekker

As every grower knows, algae, bacteria and fungi thrive in silos and basins. Algae and biofilm like to attach themselves to the basin and silo lining. Algae are responsible for the often green color of the water. This algae deposit has a negative impact on water quality and leads to additional disadvantages such as clogged filters, pipes and drippers. The biofilm is the green slime layer on the sides of basins and silos in which harmful micro-organisms live and multiply for a long time.

With a USAF ultrasonic transmitter, it is possible to get around this. The transmitter is hung in the silo or basin and produces ultrasound that causes cavitation. This creates pressure waves that kill algae and other micro-organisms, without posing a danger to animals and other aquatic life. 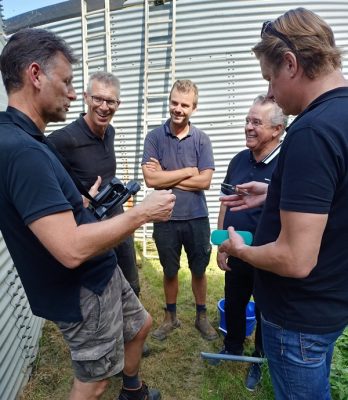 According to Robert de Hoo from Ultramins, the exclusive distributor of USAF™ ultrasonic transmitters, growers are increasingly knocking on his door. Take for example Frank Dekker of Dekker Glascultures, a tomato grower in Wervershoof. .He has been using Ultrasonic since March this year and Frank is extremely satisfied with it. "In 21 years, the basin has never been so clean," says Frank. "We hardly ever have to clean the filters. Previously, we did this once a week at this time of year, now there was only a slight loss of pressure after 7 weeks and we cleaned the filter." Some 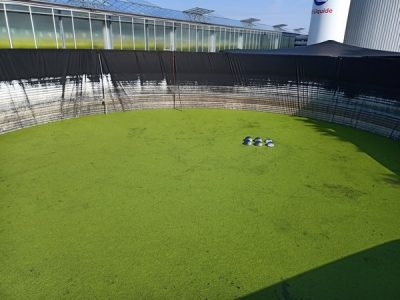 Six USAF transmitters in one of the silos

"And Frank is certainly not the only one," says Robert. "We are only getting good results and our customer base at home and abroad is growing rapidly as a result. The transmitters can be tested for 30 days and, to date, none have been returned. Moreover, the effect has been proven by various test results based on water samples. Recent research showed that even after 22 days of microscopic plating at Eurofins, water samples did not show any harmful fungal spores." research . 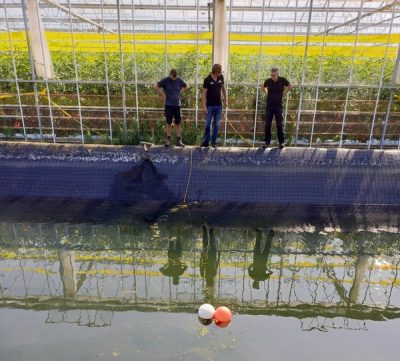 Visualising
Both Ultramins and the market expressed a desire to visualize the operation and the results of the transmitters. Robert de Hoo came into contact with Jeroen Baris, co-owner of Bewijsrapportage.nl, which specializes in architectural inspections, noise and vibration measurements, and odor detection. Jeroen has an advanced acoustic camera with which both sound and escaping energy can be made visible. For example, the location of a compressed air leak or static discharge can be precisely located. An example is the 'sound picture' below, which shows the sound of 'walking through the grass' as sound is converted into pixels. 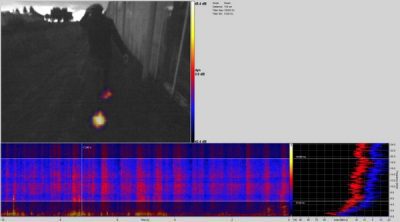 "We wanted to investigate together whether we could also show the operation of the USAF transmitter with this camera," says Jeroen. "Sound, pressure waves, cavitation, they are abstract concepts, but if we can actually make visible how far the ultrasonic pressure waves travel, then we have concrete evidence of how well they work." 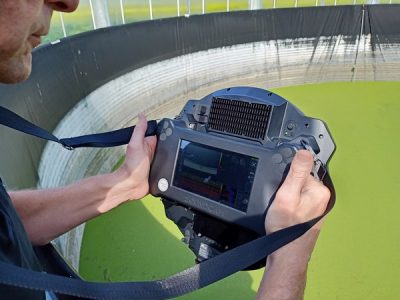 Jeroen takes a sound picture in one of the silos.

Robert and Jeroen put it to the test and used the acoustic camera to take pictures of a basin in which a USAF transmitter has been placed. The photo below shows that the ultrasonic transmitter constantly sends pressure waves that collide with any algae, bacteria, fungi and viruses present. This kills these microorganisms. Because sound and energy are created by collisions, it is possible to visualize this process by means of the acoustic camera. In the silo below, coloured pixels are visible and they show the operation and effectiveness of the ultrasonic process. 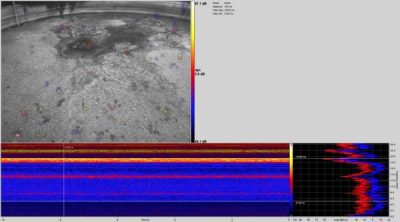 Contrast
A bit technical, but the result is finally clearly visible in practice. See for illustration the picture below. Left the (21-year-old) basin of Dekker, right a (much newer) basin of a neighboring grower. In the basin of Dekker, one can see a USAF ultrasonic transmitter. The water in Dekker's basin is transparent and there is hardly any biofilm along the walls. 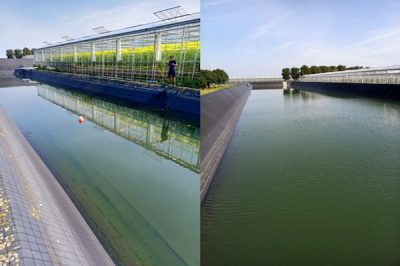 Click here for the same image but filmed from the air with a drone.