We have carried out a test on the Nova Cura, which you can see in the photo above, a test has been carried out for 6 months on this ship, we can provide reports. The Nova Cura was taken out of the water in Montenegro 2 years later and it was still free of fouling.

Cavitation is the formation of gas bubbles between water molecules. These gas bubbles continue to grow due to the continuous ultrasound and become unstable at a certain size and then these bubbles implode. The implosion causes pressure waves of 2,000 bar and for larvae this resembles strong flowing water, which is not a place where larvae want to attach. It is difficult for barnacles, mussels and oysters to feed in strong flowing water. The larvae will therefore look for another place to attach to. Our ultrasonic transmitters have a preventive effect in shipping due to their constant transmission when ships are in port.

A test has been carried out in Fort Lauderdale in America which has shown that the combination of ultrasonics with ‘easy release coating’ provides an extra good result. Only slime and micro-algae were present on the test panels. In the case of fouling, micro-algae are not the biggest problem, and the mucus is partly removed by sailing.

Ultrasonic in the box coolers

A test was carried out in 2017 to test whether the box coolers of a ferry could be kept free of fouling. The ultrasonic transmitters were mounted on the port side, normally the side with the most fouling, no transmitters were mounted on the starboard side. After 11 months, the box cooler on the port side was clean of fouling, so that full cooling capacity was maintained. The starboard side had fouling. The pictures below show the situation after 11 months. There was no copper ionisation or other forms of protective equipment on this ferry. 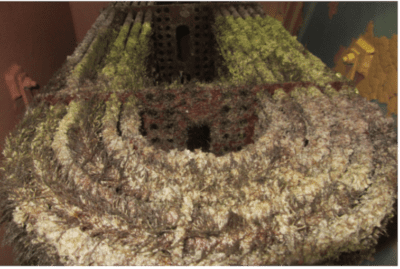